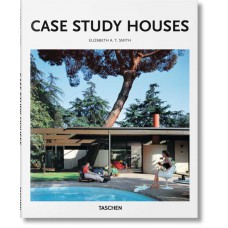 Modernism to the masses
Pioneering designs for affordable postwar homes

The Case Study House program (1945–1966) was a unique event in the history of American architecture. Sponsored by Arts & Architecture magazine, the program sought to respond to the postwar building boom with prototype modern homes that could be both easily replicated and readily affordable to the average American.
Concentrated on the Los Angeles area, the Case Study Houses included 36 model homes commissioned from such major architects of the day as Richard Neutra, Raphael Soriano, Craig Ellwood, Charles and Ray Eames, Pierre Koenig, Eero Saarinen, A. Quincy Jones, and Ralph Rapson. Their criteria included “using, as far as is practicable, many war-born techniques and materials best suited to the expression of man’s life in the modern world.”
The results of the program would redefine the modern home and extend influence not only across the United States but around the world. This compact guide includes all of the Case Study Houses with over 150 photos and plans, as well as a map showing locations of all sites, including those that no longer exist.

The author:
Elizabeth A. T. Smith is an art historian, curator, and writer. She has worked as Chief Curator and Deputy Director for programs at the Museum of Contemporary Art in Chicago and as curator at MOCA Los Angeles, where she organized Blueprints for Modern Living: History and Legacy of the Case Study Houses. Smith has taught at the University of Southern California and the School of the Art Institute in Chicago.
The editor:
Peter Gössel runs an agency for museum and exhibition design. He has published TASCHEN monographs on Julius Shulman, R. M. Schindler, John Lautner, and Richard Neutra as well as several architecture titles in the Basic Art Series.