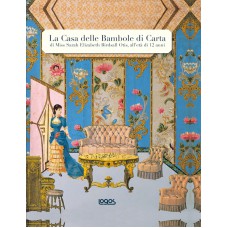 In 1884 the remarkable Miss Birdie Otis, aged twelve, made an extraordinary paper doll’s house in the form of a book. Full of period charm, but also of distinct appeal to a modern taste and sensibility, the album’s exquisite collaged rooms and tiny accessories are true works of art. This rare find – presented with press-out dolls and sticker costumes from the original collection – showcases an astonishingly daring, innate artistry, and is guaranteed to appeal to adults and children alike.

“Once upon a time – or more precisely in the
year 1884 – there lived in the Long Island village of Bellport a twelve-year-old girl named Sarah Elizabeth Birdsall Otis. She did not like her first two given names because she found them unoriginal. Instead, she asked to be called Birdsall (really her grandmother’s maiden name), which certainly was more unusual. It was also quite a mouthful, and so
she was nicknamed Birdie, from then on leaving
the Sarah Elizabeth to wither, except on official
documents.”

The author:
Eric Boman is a photographer and writer, whose work has appeared in Vogue, Vanity Fair and The World of Interiors. Swedish-born, he has worked in London, Paris and New York. He currently divides his time between New York and Long Island. His previous publications include Blahnik by Boman (2005) and Rare Bird of Fashion: The Irreverent Iris Apfel (2007.