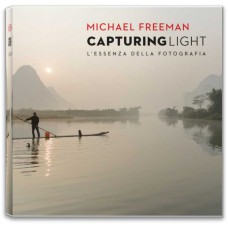 For professional photographers, chasing the light, waiting for it, sometimes helping it, and finally capturing it is a constant preoccupation and for some, an obsession. Drawing on four decades of working with light, Michael Freeman takes a simple but practical approach to interpreting, reacting to, and capturing photography’s most valuable commodity.

Practical advice is organised into three straightforward sections: Waiting, Chasing, and Helping. Begin by mastering the art of patience, and recognise the immense value of anticipating and planning for gorgeous light that’s just over the horizon. Then learn the techniques to meet otherwise transient and fleeting lighting conditions halfway, with quick thinking and fast reactions. Finally, make the most of the tools at your disposal to enhance and manipulate light as you find it, covering everything from in-the-field shooting choices to technical transformations in post-production. This is the method of a working professional the way to interpret, approach, and master whatever lighting situation is thrown at you and always get the shot, no matter what.