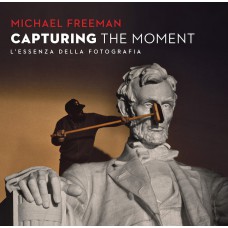 Decisive or ongoing, fast or slow, planned in advance or captured with trained reflexes, moments are what make photography unique among the visual arts, and here you will learn to recognise each moment’s potential and exploit it to maximum effect.
Beginning with a fascinating study of the history of moment in photography – all the great photographers have something to say on the subject – Michael Freeman works through a reliable, professional method for engineering decisive moments out of any occassion.
Know in advance how to arrange the elements in your viewfinder. Anticipate fleeting gestures to reveal a hidden depth of personality and expression. Wait for a scene to unfold, and then spring the trap at the climactic moment. These practical methods will deliver exquisite images every time.