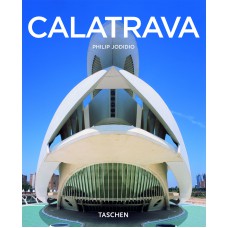 Feats of design and engineering

Santiago Calatrava is not only one of the world’s most prominent architects, but is also an engineer, sculptor, and painter. His reputation as an unparalleled architectural engineer was cemented with his numerous bridges for cities around the world. With recent projects such as the stadium for the 2004 Athens Olympic Games and the new railway station in Liège, Belgium, he has unarguably made his name in Europe and continues to look further ahead. His work is closely related to his own drawings of the human body, and to his sculptures of geometric forms, inspired by the dynamics of movement and tension. Winner of the 2005 American Institute of Architects Gold Medal and the only architect ever to have his work exhibited at both the Museum of Modern Art and the Metropolitan Museum of Art in New York, Calatrava is one of today’s greatest and most innovative architects. This book provides an introduction to and overview of his work to date.

The author:
Philip Jodidio (born 1954) studied art history and economics at Harvard, and edited Connaissance des Arts for over 20 years. His books include TASCHEN’s Architecture Now! series, and monographs on Tadao Ando, Norman Foster, Richard Meier, Jean Nouvel, and Zaha Hadid. He is internationally renowned as one of the most popular writers on the subject of architecture.