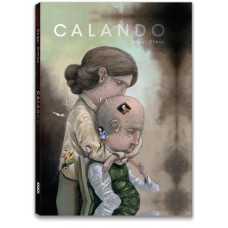 A whole life that is being lost (recovered?) in the memory of an old man, seen through the eyes of his wife who, day by day, stands by him, takes care of him and loves him, forever.
The story begins with a dream: standing on the roof of a building, the old man lets a dove fly out from his fingers. The view widens to include a greater area of the town where on the top of another, taller, building we see the dark silhouette of a rabbit. Under the rabbit’s feet a black stain is dripping on the façade of the building. The man wakes up and opens his eyes, where we see the black stain of his dream, symbolizing the darkness of the disease.
Day after day, memories get mixed with reality, whereas the oneiric dimension easily worms its way into a daily life which sinks into silence and loneliness but offers moments of deep tenderness. Without words but with a few images rich in metaphors and open to several interpretations, Roger Olmos tells about the difficulty of being together with the person you love the most and seeing them gradually turn into a complete stranger. And he does it charming our eyes with the deep and moving delicacy that few illustrators are capable to convey, the sweet melancholy that in his works always coexists with a colourful and carefree childhood.