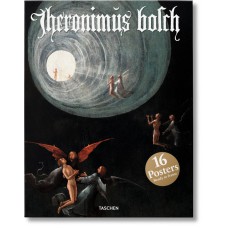 This inspiring print set offers sixteen designs to transform a blank wall into a personalized display. Each set of sixteen images has been specially selected from the TASCHEN collection as the most loved, and most interesting, examples of the artist’s work. The prints are packaged in a sturdy cardboard box and are suitable either for framing or as a poster.

Only 20 paintings and eight drawings are confidently assigned to Netherlandish painter Hieronymus Bosch (c. 1450–1516) but in their fantastical visions they have secured his place as one of the most cult artists in history. Some 500 years on from his death, his works continue to inspire scholars, artists, designers, and musicians, death metal band names and designer dresses.
Part of the problem in decoding his shocking and richly allegorical paintings is that virtually nothing is known of the artist himself, apart from his birthplace. There is no record of his life or training, no personal letters, diaries or notebooks, and no contemporary insights into his personality or thoughts on the meaning of his art. Even his date of birth can only be guessed at, and that based on a drawing assumed to be a self-portrait, made shortly before his death in 1516, which supposedly shows the artist in his late sixties. Bosch remains as mysterious as the worlds he painted.
Although rooted in the Old Netherlandish tradition, Bosch developed a highly subjective, richly suggestive formal language. With a mixture of religious humility and satanic wit, he illustrated both the joys of heaven and the cruelly imaginative tortures of hell. In his pictorial world teeming with surrealistic nightmares, the medieval imagination catches fire in a moment of final brilliance before succumbing to humanism and modern rationalism.