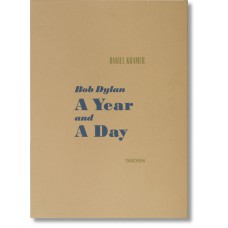 Bringing it all back home
The Dylan breakthrough portfolio

The singer-songwriter wins the Nobel Prize for Literature

Bob Dylan has won the Nobel prize for literature, celebrated for “having created new poetic expressions with the great American song tradition”. The 75-year old legend is the first songwriter to receive the prestigious award, selected by the 18 members of the Swedish Academy over other rumored favorites including the Kenyan Ngugi Wa Thiong’o, the American Don DeLillo and the Japanese Haruki Murakami.
Dylan was born Robert Allen Zimmerman in 1941 and began his musical career in the late 1950s, playing in coffee houses in Minnesota. Much of his best-known work comes from the 1960s, keeping fans spellbound with his evolution from folk to electric guitar, and his extraordinary anthems of the age. With songs such as Blowin' in the Wind and The Times They are A-Changin', Dylan became the poet laureate of a generation, channelling the febrile years of the Vietnam war and Civil Rights movement into lyrics both razor-sharp in their sense of injustice and outrage and haunting in their balladic beauty.
“Dylan is constantly looking for new things and new ideas”, says Daniel Kramer, the photographer at Dylan’s side throughout his “Big Bang” year of 1964. “When he finds them, he bends them into a shape that is uniquely his own.”

When photographer Daniel Kramer first met Bob Dylan, the 23-year-old singer was still widely unknown. At their initial meeting in Woodstock, Dylan seemed restless and uncomfortable in front of the camera. Yet over the course of a year and a day, all of that would change. From 1964 to 1965, Kramer’s extraordinary access to Bob Dylan on tour, in concert, and backstage, allowed for one of the most mesmerizing portfolios of any recording artist and a stunning document of Dylan breaking through to superstardom.
Highlights include the Lincoln Center's Philharmonic Hall concert with Joan Baez, the Bringing It All Back Home recording sessions and the now famous concert at Forest Hills, when Dylan’s controversial transition to electric guitar exemplified his constant, cryptic state of becoming. As much a document of a seminal period of rock-n-roll history as of Dylan himself, the pictures also feature such compelling friends and collaborators as Joan Baez, Johnny Cash, Allen Ginsberg, and Albert Grossman.
When first published in 1967, with the encouragement of W. Eugene Smith, Kramer’s Dylan portfolio became an instant classic. Now, a half-century later, TASCHEN rediscovers this body of work with a curated selection of near 200 images, many never published before, including outtakes from the Bringing It All Back Home and Highway 61 Revisited album cover shoots. A prized edition for any serious Dylan fan, this is an at once intimate and infinitely evocative testimony to a seminal photographer, to a particular point in time, and to a particular, mysterious artist at the moment his career went global.

The photographer:
Daniel Kramer is a photographer and filmmaker whose portraits and picture stories have been published worldwide; his film work encompasses documentaries and commercials. But it is his photographs of Bob Dylan, the first major work published about the young artist on his way from superstar to icon during 1964 and 1965, which catapulted Kramer’s work onto the international stage. A master printer, Kramer’s photographs are widely collected and exhibited. Brooklyn born, he lives in New York City with his wife and collaborator Arline Cunningham Kramer.