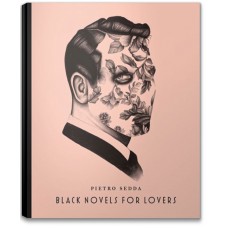 A collection of novels written on the skin in Indian ink from 2012 till yesterday, this second book by Pietro Sedda tells us what he has seen, felt, thought and inspired while wandering as the captain of a cultivated and refined ship, always interested in society and fashion. Never superficial, Sedda crosses waters – sometimes sweet and in love, sometimes motionless and irrational, or dark and disquieting – and, back to the studio, changes them into black novels on the skin of his admirers.

His world is different every day, it surprises and inspires him, as his stories change every day, hence the decision not to reprint neither his first book Santi marinai e balene ... e altri disastri nor Black Novel for Lovers, after the last copy is sold.

The artist:
Pietro Sedda, #tattooArtist from Sardinia and Milanese of adoption, is certainly one of the Italian cult tattoo artists of the moment, precisely for his well-defined and international artistic imprint. It takes months to fix an appointment at his studio.
In 2014 he has “tattooed” nine Grand Prix chairs by Fritz Hansen that have been auctioned and whose takings were donated to the Dynamo Camp, the first camp of recreational therapy in Italy that hosts boys and girls from 6 to 17 years suffering from serious diseases.
Books published by #logosedizioni Santi, Marinai e Balene..., Black novels for lovers, Neroblue limited edition, numbered and signed by the artist.