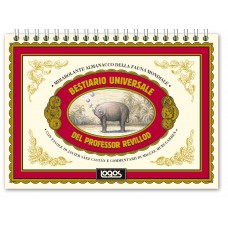 From the Professor's foreword:
“While travelling through unknown lands and seas, climbing up mysterious mountains and exploring the arcane depths of the deepest abysses, passing through railroads and soaring on air balloons, I have always followed, unalterable, my lodestar: the sentence in Esperanto that proudly stands in the emblem of the University of Bratislava, ‘La Scienco, torco kaj grido da Homaro.’ Better said: Science is the guiding light of human beings, the lodestar for progress and civilization. This is the message that I yearned to spread in those lands where my mission was needed. May the reader take advantage of this legacy that I’m leaving to posterity.” - Professor Revillod

For book lovers as well as animal lovers, a book for all ages!

The Universal Bestiary is a sort of game, a divertissement: not only because it invites us to combine the pieces of 16 illustrations of common animals such as the tiger, the rhino, the elephant… and their descriptions, but also because it assumes as true the funny (and often pulled out of the air) pieces of information contained in the text, in the illustrations and in the introduction.
With an aesthetic that recalls the manuals of systematic zoology of the XIX century, this series of fake etchings, made on the basis of false records of scientists and explorers, inserts details and concepts that are puzzling, and it plays with the conventions that define the boundaries between reality and fiction; the result is soft and humorous, but most of all very playful!

The illustrator:
Javier Sáez Castán (Spain) studied fine arts in Valencia, and shortly after he started working as a freelance illustrator. Some of his books have been translated and have received several awards: Animalario Universal del Profesor Revillod was awarded the Best illustrated book prize by the Guadalajara International Book Fair, and was selected as Book of the year by the Banco de Venezuela in 2005; La merienda del Señor Green won the same prize in 2008 and was included in the White Ravens selection. He often visits Mexico, where he was nominated for the Astrid Lindgren Award in 2010 and 2011.

The author:
Miguel Murugarren (Spain) studied literature and philosophy; the scope of his activities ranges from historical research (especially naval and pirate themes) to advertising, graphic arts, literature and music. He currently lives in the Basque-French town of Hendaye, near the port of Caneta.