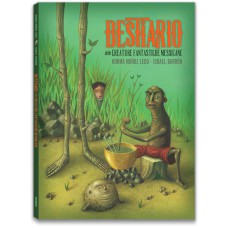 Everybody knows that Mexico is peopled by any kind of fantastic and mysterious creatures, at least according to the legends and folk tales that have been handed down for ages from one generation to another, from grandparents to grandchildren. How can we recognize them? And above all, how should we behave when we meet one of them? Fortunately this book comes to our aid, describing twenty-two imaginary beings, some very beautiful, some decisively more frightening! We become acquainted with dangerous sea monsters and people-eating elves, iguanas devouring shadows, evil birds greedy for innocent souls. But don’t worry: the rhymed lines by Norma Muñoz Ledo, perfect to be read aloud, also include suggestions about how to defend yourself! For example, did you know that to make the cat-like witch run away you only need to throw some salt against her as soon as she appears in her human shape? Or that to resist the mesmerizing song of the sea bird Tatacmó you only need to draw a cross on your chest? But, in other cases, your only chance is to cut and run! Thanks to Israel Barrón’s detailed acrylic illustrations on cotton paper, we can therefore plunge without fear in the magical universe of Mexican oral tradition, and discover creatures with human or animal features that, after closing the book, will continue to live in our imagination.

The author:
Norma Muñoz Ledo (Mexico City, 1967) took a degree in Pedagogy a the Universidad Panamericana and subsequently attended a master in Children’s literature at the University of Warwick, in the United Kingdom. Between 1994 and 1995 she was a member of the IBBY México team that, with the support of the Fondo Nacional para la Cultura y las Artes (FONCA), has collected the themes of Children’s literature. Between 1996 and 1997 she worked as a screenwriter for the children’s television programme Bizbirije. She is a member of the Sistema Nacional de Creadores de Arte FONCA of the Secretaría de Cultura of Mexico, an association for the promotion of creative activities as a fundamental part of national identity.

The illustrator:Israel Barrón was born in 1974 in Pachuca, Mexico.
He studied painting at the Faculty of Plastic Arts at the University of Veracruz and in 2007 was invited to an artistic residence in Prokuplje, Serbia.
His works have been exhibited in Mexico, Argentina, Colombia, Peru, Uruguay, Canada, the United States, Japan, Israel, Italy, Serbia, Slovakia and Spain.
He illustrated posters and book covers, and published his works in magazines and Arts sections, in both paper and digital formats. He also designed sceneries and illustrated album covers, and his works were chosen as the official images of many cultural events, including the Afrocaribeño Festival, the National Children's Book Fair of Xalapa and, in 2018, the XXXVIII International Children and Young Adults Book Fair of Mexico City.
In 2013 he was invited to participate in the Sarmede Children’s Illustration International Exhibition called Le immagini della fantasia 31; the following year he contributed to the book Cuentos populares mexicanos, a collection of traditional Mexican tales selected and rewritten by Fabio Morábito, and later included in the White Ravens catalogue of the Internationale Jugendbibliothek of Munich.
He was published by several international publishers, including Fondo de Cultura Económica, Conaculta, Colegio de México, Macmillan-Castillo, SEP, Santillana USA, Panamericana, and #logosedizioni.
Twice a winner of the CANIEM (Cámara Nacional de la Industria Editorial Mexicana) Award for publishing art, in 2017 he received the Gold Plate at the Biennial of Illustration Bratislava. In 2019 he participated as a speaker at FILBo, the Bogotá International Book Fair and at the International Congress of Illustration in Colombia.