BERLIN. PORTRAIT OF A CITY (IEP) 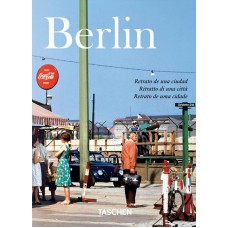 Berlin has survived two world wars, was divided by a wall during the Cold War, and after the fall of the wall was reunited. The city emerged as a center of European power and culture. From 1860 to the present day, this book presents the story of Berlin in photographs, portraits, maps, and aerial views. More than a tribute to the city and its civic, social, and photographic history, this book especially pays homage to Berlin’s inhabitants: full of hope and strength, in their faces is reflected Berlin’s undying soul.

About the series: Each compact and dynamic volume in TASCHEN’s Portrait of a City Piccolo series distills the vitality and history of each city into a billet doux packed with 150 photos accompanied by informative captions and inspiring quotations.

The author:
Hans Christian Adam studied psychology, art history and communication in Göttingen and Vienna. As a specialist in historical images, he has published numerous articles and books, including titles on travel and war photography. He is the author of TASCHEN’s Edward Sheriff Curtis: The North American Indian, Karl Blossfeldt,Eugène Atget: Paris and Berlin, Portrait of a City.