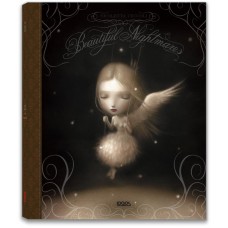 Nicoletta Ceccoli’s sweet creatures are fragile and frozen.
Tamers, mermaids, grave ladies of the house, insect-women, amazons with cloak and sword.
Ethereal and terrifying figures in a cheating merryland where the dawn light reveals the illusion. A world of surrealist echoes, where porcelain skinned dolls move, all but fragile and innocent.

Nicoletta Ceccoli was born in the Republic of San Marino and studied at the Art School in Urbino.
Since the release of her first work in 1997, she has published many books with several international publishing houses, including Random House, Simon and Shuster, Mondadori… Her books are appreciated by readers of all ages and have been translated into several languages in Europe, Asia and South America. Her illustrations have been exhibited seven times at the Bologna Children’s Book Fair and in prestigious galleries such as CoproNason (Los Angeles), Dorothy Circus (Rome), Magic Pony (Toronto), Richard Goodall Gallery (Manchester), Roq la Rue (Seattle). In 2001, Nicoletta was awarded the Andersen prize as best Italian illustrator of the year. She is also four-time winner of the award of excellence by the magazine Communication Arts. In 2006 she was awarded the silver medal by the Society of Illustrators (New York). In 2012 Mathias Malzieu has commissioned her the character design for his animation movie Jack et la mécanique du cœur, based on his book La mécanique du cœur and produced by Luc Besson.