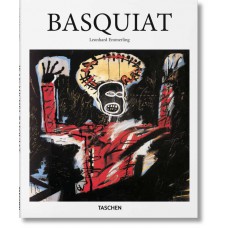 Life lines
The 80s art star who put poverty, power, and racism on the wall

An icon of 1980s New York, Jean-Michel Basquiat (1960–1988) first made his name under the graffiti tag "SAMO", before establishing his studio practice and catapulting to fast fame at the age of 20. Although his career lasted barely a decade, he remains a cult figure of artistic social commentary, and a trailblazer in the mediation of graffiti and gallery art.
Basquiat's work drew upon diverse sources and media to create an original and urgent artistic vocabulary, biting with critique against structures of power and racism. His practice merged abstraction and figuration, poetry and painting, while his influences spanned Greek, Roman, and African art, French poetry, jazz, and the work of artistic contemporaries such as Andy Warhol and Cy Twombly. The results are vivid, visceral mixtures of words, African emblems, cartoonish figures, daubs of bold color, and beyond.
This book presents Basquiat’s short but prolific career, his unique style, and his profound engagement with ever-relevant issues of integration and segregation, poverty and wealth.

The author:
Leonhard Emmerling received his doctorate from the University of Heidelberg for a thesis titled ‘Kunsttheorie Jean Dubuffets’. Since 2010 he has headed the Visual Arts Division at the Goethe Institute’s head office in Munich and was previously active as a curator at various art institutions in Germany. His publications include TASCHEN’s Jean-Michel Basquiat and Jackson Pollock.