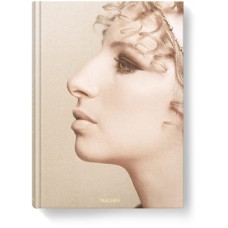 Pitch perfect
From Funny Girl to A Star Is Born, the meteoric rise of Barbra Streisand

In 1970 Barbra Streisand published a story in Life magazine titled "Who Am I Anyway?" It was the very question two leading photojournalists of the day—Steve Schapiro and Lawrence Schiller—were also asking as they photographed her during her first five years in Hollywood, working to get beneath the veneer and capture "the real Barbra."
Brimming with photographs—over half of which have never been published before—and stories behind the shots from Schapiro and Schiller, this is a must-have collection for any Streisand fan. All the best movies of Streisand's first Hollywood decade are here: Funny Girl, On a Clear Day You Can See Forever, The Way We Were, The Owl and the Pussycat, Up the Sandbox, Funny Lady, and A Star Is Born. So too are her loves, directors, confidantes, and costars: Elliott Gould, William Wyler, Sydney Pollack, Vincente Minnelli, Cis Corman, Omar Sharif, Kris Kristofferson, and, of course, Robert Redford. Through it all a picture emerges not of a singer who could act, but of an actress who could sing, write, direct, dance, and do just about anything she put her mind to.

The photographers:
Steve Schapiro is a distinguished journalistic photographer whose pictures have graced the covers of Vanity Fair, Time, Sports Illustrated, Life, Look, Paris Match, and People, and are found in many museum collections. He has published five books of his work, American Edge, Schapiro's Heroes, The Godfather Family Album, Taxi Driver and Then and Now. In Hollywood he has worked on more than 200 motion pictures; his most famous film posters are for Midnight Cowboy, Taxi Driver, Parenthood, and The Godfather Part III.
Lawrence Schiller began his career as a photojournalist for Life, Playboy, andParis Match, among others, photographing some of the most iconic figures of the 1960s, from Lee Harvey Oswald to Robert F. Kennedy, from Ali and Foreman to Redford and Newman. His many book collaborations include the Pulitzer Prize-winning book with Norman Mailer, The Executioner's Song; and he has written fiveNew York Times bestsellers. He has also directed seven motion pictures and miniseries for television; The Executioner's Song and Peter the Great won five Emmys. He is also the founder of The Norman Mailer Center & Writer’s Colony in Provincetown, Massachusetts.
The contributing authors:
Patt Morrison is a Los Angeles Times writer and columnist with a share of two Pulitzer prizes. She has six Emmys and ten Golden Mike awards for her public broadcasting work, and is the author of a best-selling book on the L.A. River.
Lawrence Grobel has written 20 books relating to writers, the entertainment industry, and its stars; and conducted the October 1977 Playboy interview with Barbra Streisand.
The editor:
Nina Wiener studied literature and art history at Vassar College in New York before falling in love with making books. Since 2002 she has edited dozens of titles for TASCHEN, including Walton Ford’s Pancha Tantra, Norman Mailer’s MoonFire, and Lawrence Schiller’s Marilyn & Me.