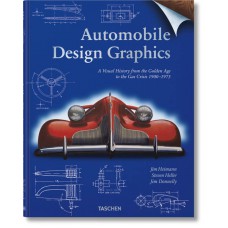 Marketing one of the major purchases of their lives to Americans was an exacting process that involved not only traditional advertising but also a crucial item that extolled the virtues of the cars: the brochure. Often oversize and sumptuously produced, including acetate overlays with fabric and paint swatches, brochures were only available at dealer showrooms or auto fairs—hence specimens of antique and vintage car brochures are rare collector’s items today.
Frequently overlooked in design and automotive histories, this piece of ephemera is a surprisingly lucid mirror image of American tastes, consumerism, and buying habits since the dawn of the automobile. American Automobile Brochures 1900–1973 presents for the first time a comprehensive overview of this mostly forgotten breed of collateral advertising. From the most obscure (Tucker, Ajax, Columbia) to the most iconic (General Motors, Ford, and Chrysler), this unprecedented visual history brings together over 500 reproductions from these rare and collectible customer brochures. Across eight decades, they present not only some of the finest cars, but also some of the best illustration and graphic design of the 20th century.
Ancillary examples of automotive literature, including the elaborate dealer manuals are also featured, alongside essays by automobile and cultural historian Jim Donnelly and America’s preeminent design historian Steven Heller. Testament to a bygone era when cars were, quite simply, the stuff dreams were made of, this books is visual and informative pleasure for car enthusiasts, designers, and pop culture aficionados alike.

The editor:
Cultural anthropologist and graphic design historian Jim Heimann is Executive Editor for TASCHEN America, and author of numerous books on architecture, pop culture, and the history of the West Coast, Los Angeles, and Hollywood. His unrivaled private collection of ephemera has been featured in museum exhibitions around the world and in dozens of books.
The contributing authors:
Steven Heller is the co-chair of the School of Visual Arts MFA Designer as Author Program. For 33 years he was an art director for The New York Times, and currently writes the “Visuals” column for The New York Times Book Review. He is the author of 120 books on graphic design, illustration, and satiric art.
Jim Donnelly is senior editor of Hemmings Motor News, the world's foremost source on automotive heritage, and has written for Hemmings Classic Car, Sports & Exotic Car, and Muscle Machines. He is the author of the racing biography, Miller's Time.

CARS NOW! A GUIDE TO THE MOST NOTABLE CARS TODAY
29.99€
Add to Cart