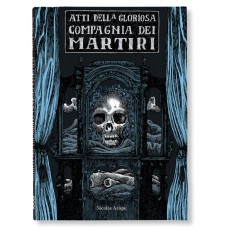 After Il libro sacro (The Sacred Book), with Atti della gloriosa compagnia dei martiri (Deeds of the Glorious Company of Martyrs) Arispe deals once again with a religious theme with a strong iconographic value. Peter and Marcellinus, Paul the Apostle, Saint Pantaleon, Catherine of Alexandria... a series of ancient martyrs follow each other page after page. Most of them lived before the first years of the fourth century AD, in the dark times when Christianity was condemned and persecuted as a heresy. To die in its name was seen as the acme of an indestructible faith capable of overcoming and enduring everything.
In this new, powerful, book by Nicolás Arispe, the image of each saint comes with a text that tells their story with an impersonal, almost aseptic style, but which at the same time ventures into risky metaphors, subjective references born from the mind of the author: the severed head of St. Quentin sinks lulled by Melville’s lines (Sink, sink, oh corpse, still sink / Down in the bottomless sea, / Down, down in the bottomless sea); the terrible torture of St. Bartholomew is compared to Uncle Luohan flayed alive in Mo Yan’s novel Red Sorghum.
The volumes of the sculptural bodies are defined by a precise and sometimes aggressive chiaroscuro, which outlines entwined hands, twisted limbs and faces torn by pain, never allowing a shadow of doubt to surface in the gazes fixed on the Most High or in the eyes blinded by mystical rapture. As in Lasciate ogni pensiero o voi ch’intrate, Arispe adopts a medieval graphic style, in line with the iconographic tradition he deals with. Sometimes the images turn out to be overwhelming, with their overloaded scenes, crowded with monsters or burdened by a looming sky, sometimes they reach the highest essentiality, depicting the saints alone with their faith. An original book capable of blending the high and the low, the sordid and the mystical, ancient icons and modern cultural references in a hermeneutics of martyrdom and punishment.

Nicolás Arispe was born in Buenos Aires in 1978 and studied drawing and visual arts at the Instituto Universitario Nacional de las Artes (IUNA). Since 1997 he has worked for TV and movie productions, taking part in the creation of animated movies and cartoons, distributed in Argentina, Brazil, Mexico and Spain, in the design of CD and book covers and in some editorial projects.
His first illustrated book dates back to 2005; since then, he has created several other books and illustrated the work of various writers, among which María Teresa Andruetto, Alberto Laiseca and Alberto Chimal, published in Argentina, Mexico, France, Italy, Guatemala, Spain, etc.
During his career he has been awarded by ALIJA (Asociación de Literatura Infantil y Juvenil de la Argentina), the Argentinian section of IBBY (2005 and 2016), by the Banco del Libro de Venezuela (2013 and 2018), by the Cámara Nacional de la Industria Editorial de México (2013 and 2016), and by the Feria Internacional del Libro de Bogotá (2016), and has been selected for the White Ravens 2016 catalogue by the International Youth Library. In 2018 he entered the IBBY Honour List for his work as an illustrator.
Since 2001 he has been teaching art to children, teenagers and adults.
Books published by #logosedizioni: La madre e la morte / La perdita (2016), Il Libro sacro (2017), Lasciate ogni pensiero voi ch'intrate (2018), Tutti contenti (2019), Atti della gloriosa compagnia dei martiri (2019), Lungo è il cammino (2019) and El árbol (2020).