NATIONAL GEOGRAPHIC. AROUND THE WORLD IN 125 YEARS. ASIA & OCEANIA 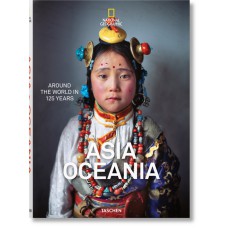 It was a bold, controversial move, which alienated the old guard, delighted readers, and signaled the future of image-led mass-market media. In 1905, National Geographic magazine, then barely 30 years old, elected to run a pictorial spread about life in Tibet. Ignoring the scandalized splutters from the more staid board members of the National Geographic Society, Editor Gilbert Hovey Grosvenor and President Alexander Graham Bell went on to build a team of staff photographers. By 1910, the magazine was regularly featuring photography, affording its readers an armchair view of lands, peoples, and cultures worldwide.
Inspired from our monumental Around the World in 125 Years, this volume is the ultimate voyage through the magazine’s archives of its Eastern travels. Rugged terrains, mystical mosques and temples, sprawling cities, wonderful wildlife, evocative portraits, and social documentary all feature in this epic photographic tribute to the amazing Asia.
For five generations, National Geographic magazine has dazzled and educated people with its incredible photographs, illustrations, and gripping stories from the four corners of the earth. Combining travel, wildlife, science, history, culture, and conservation, the National Geographic Society’s trailblazing magazine has inspired millions of readers to explore and take an interest in the planet we inhabit.

The editor:
Reuel Golden graduated in politics from the University of Sussex, UK, and is the former editor of the British Journal of Photography. He has edited various titles for TASCHEN including Her Majesty, Harry Benson: The Beatles, Rolling Stones, The beautiful game. il calcio negli anni '70, and the New York and London editions of the Portrait of a City series.