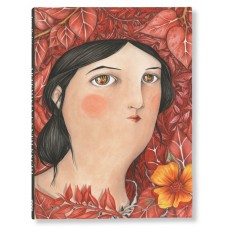 Artemisia’s eyes are aglow with the fire burning in the greatest artists. Alone, at her home, she made her paintings shine bright, she gave life to color. She followed her destiny, with passion and perseverance. But it was precisely her home that welcomed the danger, letting the shadows thicken outside and inside of her. Until Artemisia drove them away by painting light and was reborn, forever, through the strength and courage of her female heroines...

At the age of eighteen, Artemisia Gentileschi was raped by her teacher, the painter Agostino Tassi. Thus, like many women in all ages, and still nowadays, she was forced to suffer not only the physical and psychological pain caused by violence, but also social stigma and a humiliating trial. Nevertheless, she stubbornly stood up for her rights, in spite of the long and mortifying gynecological examinations she had to endure, and did not retract her testimony even under torture. Eventually, she won the lawsuit, but this was not enough to silence the slanders, finally forcing her to leave the city where she was born and raised. It was during those hard years that she painted Judith Slaying Holofernes, one of the paintings in which she represents her own struggle through the exploits of strong and courageous biblical heroines.

Artemisia Gentileschi is one of the best-known and most loved Italian painters of all time, a symbol of feminist claims and the protagonist of films and literary works. She has left an extensive production which is characterized by a masterful use of light and follows the example of Caravaggio as regards the conception of the scene, the chiaroscuro, the plasticity of volumes and the contrasts between shapes and colors. Despite living in an era where women had few opportunities and notwithstanding the traumatic event that marked her life, she earned her place as a major figure in the history of art.

After the first two titles dedicated to Maria Sibylla Merian and Giovanna Garzoni, this is the third volume of the #logosedizioni series about great female artists. By paying homage to the painting of Artemisia Gentileschi through her bright illustrations and vivid colors, Anna Paolini highlights the strength and spirit of an artist who was able to react to adversity by changing suffering into beauty.

Anna Paolini was born in Bologna, where she attended the Accademia di belle arti before specialising in book illustration at the Accademia Internazionale Comics.
Books published with #logosedizioni: S’alza il vento (2018), Matrioska (2019), Maria Sibylla Merian. The magic of the chrysalis (also available in Italian, 2019) e Giovanna Garzoni. A gift of love (also availble in Italian, 2019).

MARIA SIBYLLA MERIAN. THE MAGIC OF THE CHRYSALIS
18.00€
Add to Cart