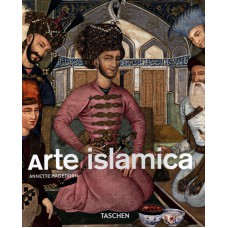 The delicate splendour and fairytale beauty of Islamic art

The art which arose from the 7th century in the Islamic empires reached from Spain and Morocco to the borders of China. It bore the stamp above all of Arabs, Persians and Turks, but outstanding contributions also came from Egypt and India. "Islamic Art" presents prominent examples: luxury ceramics, prayer mats, goldsmithery, as well as witnesses to the decorative arts and calligraphy – and above all the masterpieces of the splendidly colourful courtly book illumination of Persia and the Mughal emperors of India. The book examines the contributions of the different countries and how they influenced each other, and in this way vividly illustrates the unfolding of the delicate splendour and fairytale beauty of Islamic art from its beginnings into the modern era.

The author:
Annette Hagedorn studied the history of oriental art, German literature, and art history at the universities of Bonn and Mainz. She has held part-time teaching posts at the universities of Bonn, Mainz and Utrecht. In 1991 she was awarded the Alice-Boner-Memorial Prize from the Alice Boner Foundation in Zurich for her dissertation on Islamic metalwork in the 13th and 14th centuries. Since 2000 she has been co-editor, responsible for art history and archaeology, of the journal Zeitschrift der Deutschen Morgenländischen Gesellschaft.