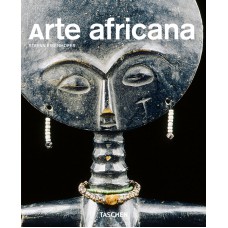 Art from the African continent occupies an unusual place in the concert of world cultures. Once considered "primitive" by colonial invaders, it has long since been recognized and acknowledged for its highly developed sense of design and aesthetics. Similarly, African art is often concerned with vital moral and spiritual concerns of the human condition, and frequently has a ritual or religious function—whether in masks, ancestral figures, ceramics, basketry, metalwork, or weapons. The items in this volume, mostly datable only with difficulty, start with a sculptured head from Nigeria, possibly dating from the 12th century, and extend from a 15th/16th-century salt container from Sierra Leone to the 19th and 20th centuries, to which most of the artworks belong.

With examples from every region of the continent—including Mali, Democratic Republic of Congo, Republic of Congo, Madagascar, South Africa and a dozen other countries—this book demonstrates the profundity and astonishing variety of African arts, describing the social and religious contexts without which these artworks cannot be fully understood.
About the Series:
Each book in TASCHEN's Basic Genre Series features:
The author:
Ethnologist and historian Stefan Eisenhofer has been head of the African department of the Museum für Völkerkunde in Munich since 2001. He co-founded the museum's Munich EthnoFilm Days and Urban African Sounds concert series. He also teaches at the Institute for Ethnology at the University of Munich, and has curated various exhibitions including Genocide Monument (2004). His book Painted People (2005) explores body art on all five continents.