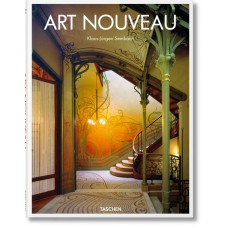 Art Nouveau, whose emergence at the same time as cinema was no mere coincidence, represents the most remarkable attempt to reconcile the demands of the technical age with the undying wish for beauty and glorification—or to pit them against the other.
Here the reform movement of the turn of the century is not only dealt with as an artistic event, but those economic and political interests which inspired, supported, and handicapped it are also taken into account. In the chapters "Movement," "Unrest", and "Equilibrium," the historical phenomenon as a whole is characterised and is also presented with its own distinct local features. The centres of Brussels, Nancy, Barcelona, Glasgow, Helsinki and Chicago are dealt with in subchapters as are Munich, Darmstadt and Weimar. Finally, Vienna, that city in which the synthesis achieved its culmination, is described separately. The outstanding artists are examined in detail in connection with the respective cities of their greatest activity. The result is a complex picture of the symbiosis of architecture, furniture design, and craftsmanship with their corresponding approaches to artistic revitalization.

The author:
Klaus-Jürgen Sembach organised the exhibitions "Die Nützlichen Künste" (Useful Arts), 1981 in Berlin, "Zug der Zeit – Zeit der Züge" (The Railway Era), 1985 in Nuremberg, "So viel Anfang war nie – Deutsche Städte 1945–1949" (Never have there been so many beginnings – German cities 1945–1949) in Nuremberg and Berlin 1989, and has numerous publications on architecture, design, photography and film to his name.