login | create an account
Categorie
Home » Search » ART FOR ALL. THE COLOR WOODCUT IN VIENNA AROUND 1900

ART FOR ALL. THE COLOR WOODCUT IN VIENNA AROUND 1900 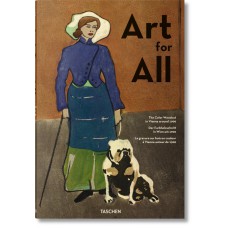 At the turn of the 20th century, amid the domed grandeur of Vienna, a group of Secession artists reclaimed the humble woodblock. The gesture, though short-lived, and long overlooked by established art histories, may be seen as a decisive social, as well as aesthetic, moment. Elevating a primarily illustrative, mass-production medium to the status of fine art, the woodblock revival set a formal precedent for Expressionism while democratizing an art for all.

Coinciding with the travelling exhibition through the Schirn Kunsthalle, Frankfurt and Albertina, Vienna, this TASCHEN edition brings together leading examples of the Viennese woodblock renaissance to give a long overdue exploration of its achievements and influence. Through prints, publications, calendars and pages from Ver Sacrum, the official magazine of the Vienna Secession, it gathers works remarkable for their graphic and chromatic intensity, and vital with the traces of japonisme as much as the stylistic seeds of Die Brücke, Der Blaue Reiter and later Expressionist movements.

Through figure studies, landscapes, patterns, and typographical treasures, the featured works are accompanied by detailed captions, as well as essays exploring their aesthetic and ideological implications, and biographies for the more than 40 artists. Examining their stark contours, stylization of the surface per se, and tendency towards contained color areas we evaluate the Viennese woodblocks as essential harbingers, and benchmarks, of the 20th century modernism to come. At the same time, we assess how the dissemination of the woodblock substantiated the Seccessionist claim for a democratized, all-encompassing art, while adding to their reappraisal of originality, and authenticity, and convention.

The editors:
Tobias G. Natter is a writer, curator, and musuem director with specialist expertise in Viennese art at the turn of the century. He worked at the Österreichische Galerie Belvedere in Vienna for 15 years and as a guest curator at the Neue Galerie in New York from 2001–2002. From 2006 to 2011, he was director of the Vorarlberg Museum in Bregenz and from 2011 to 2013, director of the Leopold Museum in Vienna. In 2014 he founded Natter Fine Art, which focuses on the development and implementation of exhibitions and on research.

Max Hollein studied business administration and art history at the universities in Vienna. From 1995 to 2000 he had a leading function at Solomon R. Guggenheim Museum in New York. Max Hollein is a member of international supervisory and advisory committees, curator of numerous exhibitions, and editor of more than one hundred exhibition catalogues. He has published on modern and contemporary art and on museums in general. From October 2001 to May 2016 he was director of the Schirn Kunsthalle in Frankfurt, and as of January 2006 also of the Städel Museum and the Liebighaus with its sculpture collection. He has been director of the Fine Art Museum in San Francisco since June 2016.

Klaus Albrecht Schröder studied art history and history at Vienna University. From 1988 to 2000, he was director of the Kunstforum Wien and established it as an exhibition venue with trailblazing presentations. From 1996 to 2000 Schröder was a board member and commercial director of the newly-founded private Leopold Foundation, and in 1999 he was appointed designated managing director of the Albertina in Vienna. Since January 2000 he has headed the Albertina as managing director and director. After it reopened in 2003, within the shortest space of time the Albertina was ranked as the most visited museum in Austria.