ARCHITECTURE IN THE 20TH CENTURY 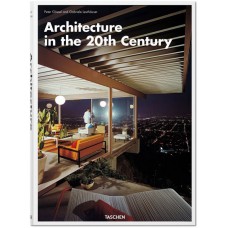 This is the be-all-end-all reference work for architecture in the 20th century. From lofty “starchitects” to lesser-known names around the world, this chronological overview takes you to the heart of the ideas, trends, and transitions that defined the 1900s.
From Frank Lloyd Wright to Antoni Gaudí to Frank O. Gehry to Shigeru Ban and all the best stuff in-between, it’s all here. The chronologically organized chapters put it all into perspective, illustrated by hundreds of large-format photos as well as a plenitude of drawings and floor plans. The biographical appendix covers all of the century’s greatest architects, including today’s new talents. An indispensable reference work and an absolute must for all lovers of architecture!
“A rich source of reference for both students and architecture enthusiasts.”
— C20, London

The authors:
Peter Gössel runs an agency for museum and exhibition design. He has published TASCHEN monographs on Julius Shulman, R. M. Schindler, John Lautner, and Richard Neutra, as well as several architecture titles in the Basic Art series.
Gabriele Leuthäuser worked as a scholarly associate at Centrum Industriekultur Nürnberg until 1984. She worked as a freelance consultant advising on exhibitions, museums, and industrial enterprises until her death in 2013.