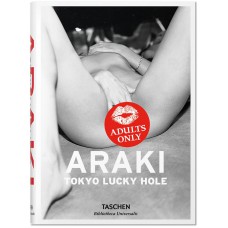 It started in 1978 with an ordinary coffee shop near Kyoto. Word spread that the waitresses wore no panties under their miniskirts. Similar establishments popped up across the country. Men waited in line outside to pay three times the usual coffee price just to be served by a panty-free young woman.

Within a few years, a new craze took hold: the no-panties “massage” parlor. Increasingly bizarre services followed, from fondling clients through holes in coffins to commuter-train fetishists. One particularly popular destination was a Tokyo club called “Lucky Hole” where clients stood on one side of a plywood partition, a hostess on the other. In between them was a hole big enough for a certain part of the male anatomy.

Taking the Lucky Hole as his title, Nobuyoshi Araki captures Japan's sex industry in full flower, documenting in more than 800 photos the pleasure-seekers and providers of Tokyo’s Shinjuku neighborhood before the February 1985 New Amusement Business Control and Improvement Act put a stop to many of the country's sex locales. Through mirrored walls, bed sheets, the bondage and the orgies, this is the last word on an age of bacchanalia, infused with moments of humor, precise poetry, and questioning interjections.
The photographer:
Nobuyoshi Araki was born in Tokyo in 1940. Given a camera by his father at the ripe age of twelve, Araki has been taking pictures ever since. He studied photography and film at Chiba University and went into commercial photography soon after graduating. In 1970 he created his famous Xeroxed Photo Albums, which he produced in limited editions and sent to friends, art critics, and people selected randomly from the telephone book. Over the years, his bold, unabashed photographs of his private life have been the object of a great deal of controversy and censorship (especially in his native Japan), a fact that has not fazed the artist nor diminished his influence. To date, Araki has published over 400 books of his work.
About the Series:
Bibliotheca Universalis — Compact cultural companions celebrating the eclectic TASCHEN universe at an unbeatable, democratic price!
Since we started our work as cultural archaeologists in 1980, the name TASCHEN has become synonymous with accessible, open-minded publishing. Bibliotheca Universalis brings together nearly 100 of our all-time favorite titles in a neat new format so you can curate your own affordable library of art, anthropology, and aphrodisia.
Bookworm’s delight — never bore, always excite!