login | create an account
Categorie
Home » D'HANCARVILLE. THE COMPLETE COLLECTION OF ANTIQUITIES FROM THE CABINET OF SIR WILLIAM HAMILTON - #BibliothecaUniversalis

D'HANCARVILLE. THE COMPLETE COLLECTION OF ANTIQUITIES FROM THE CABINET OF SIR WILLIAM HAMILTON - #BibliothecaUniversalis 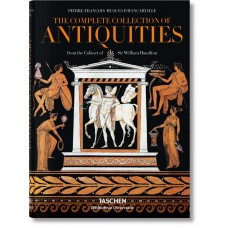 Visions of vases
Images that inspired the neoclassical imagination

Antiquarian, archaeologist, vulcanologist, and envoy to the British Embassy in Naples, Sir William Hamilton (1731–1803) was a leading European figure of his time. Though the romance between his wife Lady Emma Hamilton and Horatio Nelson tends to eclipse Sir William’s own activities, his work as a scientist and a classicist made major contributions to the study of Pompei, Herculaneum, and Mt Vesuvius.
As an expert in ancient art, Hamilton also built up an invaluable collection of ancient Greek vases, subsequently sold to the British Museum in London in 1772. Before the pieces were shipped off to England, Hamilton commissioned Pierre-Francois Hugues d'Hancarville, an adventurous connoisseur and art dealer, to document the vases in words and images. The resulting catalog, published in four volumes and known as Les Antiquités d'Hancarville, represents a neoclassical masterpiece. Never before had ancient vases been represented with such meticulous detail and sublime beauty.
With this reprint, TASCHEN revives d'Hancarville’s masterful catalog for a contemporary audience, reproducing in exacting detail the same pristine images that sparked Europe's love affair with the classical style.

The authors:
Madeleine Gisler-Huwiler studied classical archaeology, ancient history, and old Egyptian at Fribourg University. She has collaborated on various excavations and exhibitions and is presently writing a catalogue of the first Hamilton collection of vases for the British Museum.
Sebastian Schütze was a longtime research fellow at the Bibliotheca Hertziana (Max Planck Institute for Art History) in Rome. He is a member of the academic board of the Istituto Italiano per gli Studi Filosofici in Naples, and a corresponding member of the Österreichische Akademie der Wissenschaften. From 2003 to 2009 he held the Bader Chair in Southern Baroque Art at Queen’s University in Kingston. In 2009 he was appointed Professor of Early Modern Art History at Vienna University.

THE WORLD OF ORNAMENT
50.00€
Available