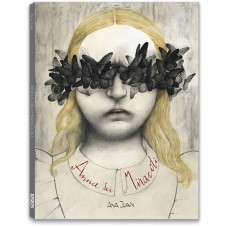 Before little Helen turns two, hundreds of black butterflies enter from a gash in the veil protecting her cradle. Encircling her head and covering her eyes and ears, they suddenly plunge her into darkness. With their wing beats, they prevent her from hearing the voices of her loved ones.

The little girl grows up wild and capricious, locked in her world and rejecting the love of her parents, who desperately look for someone who might help them educate her. That’s how Anne, a teacher coming from the North, enters their lives. Thanks to her expertise and fortitude she succeeds in tearing Helen from her world of darkness, finding a way to communicate with her: fingerspelling, namely the representation of letters with the fingers on the palm of the hand of your interlocutor. In this way, Helen slowly learns the names of things. From that moment, her life radically changes.

Revisiting the traditional light/darkness dichotomy, Ana Juan retells the story of Helen Keller and Anne Sullivan – best known from the movie The Miracle Worker (USA, 1962 – Anna dei Miracoli in Italian) – in her signature style. Through a clever use of chiaroscuro and the juxtaposition of bright golden yellows and the blacks and greys of charcoal, the artist manages to effectively recreate the struggle of Helen and her “fairy mother” (as she calls Anne) to emerge from darkness to light.

The book tells a real story. Born in Tuscumbia, Alabama, in 1880, before the age of two Helen Keller contracted a fierce disease (according to subsequent studies, it had to be meningitis or scarlet fever) which left her deaf and blind. Isolated and frustrated, the girl grew up capricious, quick-tempered and aggressive, until – thanks to Anne Sullivan’s help – she learnt how to communicate, read and write, becoming the first deaf-blind person to graduate, and then a writer, activist and teacher.

On the occasion of the 50th anniversary of Helen’s death (1968-2018), and thanks to the lyrical texts and the gorgeous illustrations by Ana Juan, #logosedizioni presents this touching and inspiring story, enriched by a figure and a short essay on fingerspelling.

Anna dei miracoli is the third volume of the CBM #logosedizioni series, launched with Blind by Lorenzo Mattotti, and continued with Lucia by Roger Olmos. The series precisely aims to open a window to the world of disability and diversity, and to arouse empathy through the principle of inclusion. It is a series addressed to children (and adults as well) aiming to show meaningful realities to and through their eyes.

Ana Juan is a Spanish illustrator, author and painter. Born in Valencia in 1961, she moved to Madrid in the early 1980s. She exhibits her works and publishes her books all over the world – Spain, United States, Japan. Well acknowledged for her original, melancholic, romantic and sometimes merciless interpretation of reality and its stories, Ana has illustrated several covers for the New Yorker, editorials for El País and the covers of many novels by Isabel Allende and others classics of the world literature.
Ana Juan was awarded – among other prizes – the Ezra Jack Keats Prize for best new illustrator (The Night Eater, 2005), the Premio Junceda de Ilustración (For you are a Kenyan Child, 2007) and, in 2010, the prestigious Premio Nacional de Ilustración by the Spanish Ministry of Culture.
Books published by #logosedizioni: Amantes (from which the following short stories have also been individually published: Different Love, Faithful Love, Fickle Love, Final Love, Unknown Love and Weekly Love (all available also in Italian, Spanish and French), Circus, L’isola, Snowhite, Sorelle, Postcards Ana Juan, Demeter (also available in Italian, French and Spanish), Promises (also available in Italian, French and Spanish), Complete Works, Carmilla, Lacrimosa (also available in Italian and French), Frida and Anna dei miracoli.