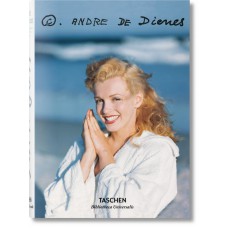 Before Marilyn, there was Norma Jeane
A story of love and friendship with a megastar in the making

One day in 1945, fashion photographer Andre de Dienes met an aspiring model named Norma Jeane Dougherty. It was a momentous moment, both for his personal life and his photographic portfolio. Over the next few years, he would be briefly engaged to Norma Jeane, take a number of adventurous road trips with her, and build up a stunning series of portraits which would help launch her modelling, and later movie, career.
Now available as part of TASCHEN's Bibliotheca Universalis series, this collection of de Dienes' photographs and private memoirs offers an intimate picture of Norma Jeane the woman, before she was Marilyn the icon. From their trip to see Norma Jeane’s mother in a mental hospital to Marilyn’s visit a few days before her death, de Dienes' emotion-laden archive, often annotated with handwritten notes, offers a deeply personal account of Monroe's transformation from a sensitive, ambitious girl into a deeply troubled global star.