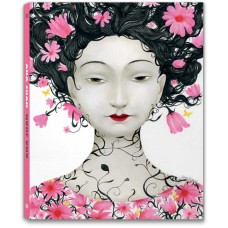 A celebration of Ana Juan’s versatile and intriguing talent.

A catalogue of works taken from her extensive production that stages oneiric visions – fascinating, agonizing, ironic or sordid – bringing her manifold characters to the forefront.
The absolute protagonist of her images is the body, which prevails over space and objects in terms of size and plasticity. There are countless references to classic painting: the chromatic and sculptural majesty of Tamara de Lempicka’s women, Marc Chagall’s romantic and floating atmospheres, Gauguin and Modigliani’s portraits, the curves of Picasso’s Guernica, The Kiss by Klimt. And also expressionist and cubist influences, flaming hair reminiscent of pre-Raphaelite art and echoes of a certain Japanese syncretism.
The book gathers the covers for the novels by Isabel Allende and The New Yorker magazine, the illustrations for La revista de El Mundo and El País, the posters designed for film festivals such as Tokyo’s Latin Beat Film Festival, circuses and book fairs…
Fascinating interiors immersed in early twentieth century atmospheres alternate with fairy-tale landscapes and exuberant still-lives with living intruders, but above all with portraits, of both realistic and imaginative characters, caught in a range of moods. The book includes the illustrations of Ana Juan’s books published by Logos edizioni: the snapshots of Amantes, representing years, days or minutes of love from an unusual point of view; the bizarre protagonists of the sombre black charcoals revived by rare dashes of colour in Circus; the illustrations loaded with sensuousness and mysterious symbols in Promises, a dance of black and red; the sordid black and white images of Snowhite, a sarcastic interpretation of the classic tale of the Brothers Grimm; the stormy nightmare of L’Isola; the voluptuous red hair that pierces the grey and sepia tones of the charcoal in Sorelle; the deep black ink dripping with suspense in Demeter. And two illustrations from the #SPACCACUORE series, released in March 2015.
From blinding riots of colours to deep black ink, this book will project you into a kaleidoscope of styles, techniques and atmospheres, which will delight your eyes and let your mind travel.