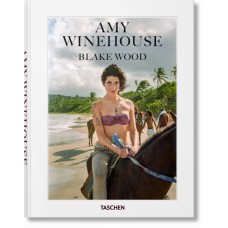 When 22-year-old American photographer Blake Wood moved to London on the heels of a breakup in 2007, a mutual friend introduced him to Amy Winehouse. After winning five Grammy Awards for her 2006 album Back to Black, the celebrated singer with the sultry and emotionally raw voice was at the height of her celebrity, but struggling with her wayward partner and the scrutiny of constant media attention. Bonding over their relationship woes, Wood and Winehouse developed a close friendship and would become inseparable for the next two years.
From images of Winehouse performing in Paris to playing drums at her home studio in Camden Town, London, from lovingly composed portraits of her at ease on St. Lucia to carefree vamping for the camera, this is an intimate visual diary of the soul diva at a time when she was one of the most celebrated voices on Earth.
The story of this profound emotional collaboration is told through the lens of her confidant, in 150 color and black-and-white photographs that reveal their mutual love, trust, and respect. With text by acclaimed pop culture critic Nancy Jo Sales, discover a rare and lighter side of this much-missed icon, totally at ease in front of her friend’s camera; a typical young London girl enjoying life to the fullest.

“This is not a doom-and-gloom-and-then-she-dies story. There were amazing bright moments amid all the chaos and that’s what I see in these images.”— Blake Wood

The photographer:
Blake Wood is a multidisciplinary American artist based in New York City and London. Wood’s work has been featured in international media outlets, including Channel 4 UK, i-D, Vice UK, and Dazed.

The author:
Nancy Jo Sales is an award-winning journalist and New York Times best-selling author; her books include American Girls: Social Media and the Secret Lives of Teenagers (2016) and The Bling Ring: How a Gang of Fame-Obsessed Teens Ripped Off Hollywood and Shocked the World (2013). She has written for magazines such as Vanity Fair, New York, and Harper’s Bazaar.