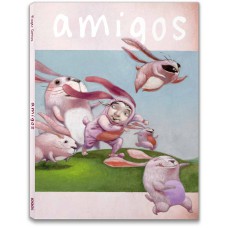 On her way back home, a mother walks into a bookshop and decides to give a surprise to her daughter. She chooses an illustrated book with a nice piglet on the cover. Excited, the little girl immediately runs up to her room to concentrate on reading. All of a sudden, as if by magic, a blue sky full of immaculate and soft clouds bursts open under her feet and she falls down losing a slipper. Fortunately, she lands on something soft: a little bird nosedives to save her. Thanks to her new friend, the little girl starts to explore a pure world, where she meets rabbits, piglets, owls, giraffes, bears, cows, and monkeys... Everybody warmly welcomes her, ready to play games and have thrilling adventures together into the wild. Time marvellously goes by until it is time for dinner...
Amigos is a book about love. Like the young protagonist, even the reader is carried away to a dream world, where animals and human beings live with each other as friends, in harmony. A dream which children spontaneously live, establishing a relationship with animals and instinctively and sincerely empathizing with them.
Like in SENZAPAROLE, even in this book Roger Olmos carries on the fight – tactfully and with indisputable logic – he has started several years ago in favour of Veganism, which he considers as the only ethically acceptable way of living on our planet and loving the animals that inhabit it. All animals!
Amigos is a book for children, so that they can read it to their parents.