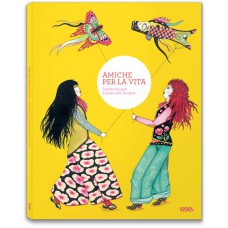 The illustrator:
“A lot of wonderful and terrible things happened in my life, as well as in everybody else’s. And this is what I draw, the wonderful and the terrible.”
Painter and illustrator Emmanuelle Houdart was born in Switzerland in 1967. After graduating from the École des Beaux-Arts in Sion and the École Supèrieure d’Arts Visuel in Geneva, she moved to Paris. Besides contributing to many newspapers and magazines (Libération, Le Monde, Sciences et Vie Junior, Ça m’intéresse… ), she published a dozen books as a writer and illustrator, and she illustrated about twenty children’s books. Her style is highly personal and characterized by the use of rich and sharp colours, outlining a fantastic though extremely real and tangible world.
In 2003 she won the Prix Octogone, category Prix Graphique (CIELJ), for Les Choses que je sais. Two years later she received an award for Monstres malades at the Bologna Children’s Book Fair, and in 2006 she won the Grand Prix du Livre Jeunesse of the Society of Men of Letters of France for Les Voyages merveilleux de Lilou la fée.
Her books for #logosedizioni are: Va tutto bene Merlino!, Amiche per la vita, Il denaro, Saltimbanchi, Il guardaroba, Genitori felici, Una lunga storia d’amore, Rifugi, Emilia Mirabilia, Mia madre, Mostri malati, Il mio pianeta and Sfilata di Natale. Un calendario dell'avvento.

The author:
Laetitia Bourget was born in La Rochelle in 1976. Today she lives and works in Paris and Néons-sur-Creuse. In 1998 she graduated in Plastic Arts at the University of Bordeaux 3. Since 1997 she has been active in various artistic fields (video, photo, book publishing, installations, writing, drawing, site-specific works). She soon gained visibility thanks to the distribution of her videos to international events and video art festivals. Her works have been displayed worldwide in galleries and institutional and alternative spaces, and are featured in private and public collections in France and abroad.
Since 2003 she has been publishing children’s books with Seuil Jeunesse, Thierry Magnier, and Sarbacane, and more recently books enriched by small numbered plates with Nuages.
Her books for #logosedizioni are: Amiche per la vita, Genitori felici, and Una lunga storia d’amore.