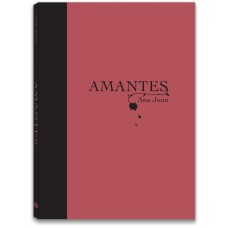 Amantes, lovers in English... 11 instant shots that describe the years, days or minutes of love spent by two people, fleeting or life-long love, evanescent, imaginary, faithful or unpredictable like wine.
Originated from the challenge of illustrating 11 different love stories through 8 images and 8 “lyrics” for each one of them, this extreme synthesis exercise captures the universal essence of the many variations of this feeling, surprising us with this unusual approach to an apparently ordinary topic. Constantly pervaded by a melancholy feeling of expectation and a pointed attention to diversity, the eleven timeless parables of Ana Juan actually strike us for the total absence of the traditional happy ending, for the unpredictable epilogue, for the ability to take on an original point of view and stage a show where the protagonists usually play secondary characters.
Without forgetting the overall structure and the sequential distinctive feature, Ana’s eleven parables unroll before our eyes: the faithful love, always on time. The weekly love, with its secret chambers and silences. The unpredictable love, euphoric and bitter. The definitive love of a life time. The different love, able to overcome any hurdle and to throw you in the deepest of despairs. The faraway love, made of tears, stolen kisses and waiting rooms. The sleeping love, stirring suddenly from its lethargy. The proud love, jeopardizing everything with an excess of arrogance. The evanescent love, burning over in a sunny day. The unknown love that connects lonely souls. And the first love, the one we all know, made of tremors, instants of shyness and delicate gestures.Nevertheless, the images are the true protagonist of this volume. Images ruled by the amantes
bodies, that, with their volumes and sculptural quality, take over the surrounding objects and sometimes the space in which they move. Expressionist and cubist influences, references to Modigliani and a certain Japanese syncretism weave through the love stories, articulated by a dominant chromaticism that gradually becomes brighter through the second half of the book. The unique imaginary of Ana Juan describes those who dream, desire, remember and live love.

The illustrator and author:
Ana Juan