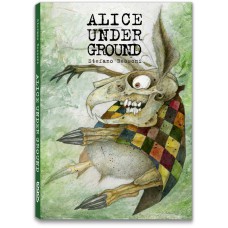 ALICE UNDER GROUND is a travel journal with notes and sketches on the inhabitants of Wonderland. A bestiary compiled with the gaze of a Victorian naturalist, simultaneously passionate about insects, skeletons, ghosts and photography.
It’s a journey among underground inhabitants seen from a slightly macabre personal perspective, an outsider’s viewpoint, where Alice too becomes an underground dweller, perfectly at home in that reversed world which is supposed to astonish her.

Also available in Italian and Spanish