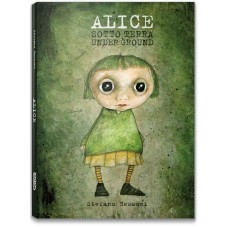 Three years after the release of Alice Under Ground, #logosedizioni publishes a new expanded edition with 7 new illustrations and new funny characters of this homage Stefano Bessoni – writer and illustrator – pays to the genius of Lewis Carroll. Freely adapted from Alice’s Adventures in Wonderland and Through the Looking Glass, the book is a travel journal with notes and sketches on the inhabitants of Wonderland. A bestiary compiled from the perspective of a Victorian naturalist, simultaneously passionate about insects, skeletons, ghosts and photography… It’s a journey among underground inhabitants seen from a slightly macabre personal perspective, an outsider’s viewpoint, where Alice too becomes an underground dweller, perfectly at home in that reversed world which is supposed to astonish her.