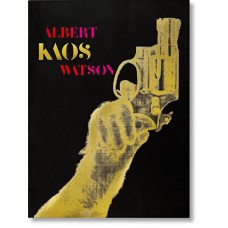 What makes Albert Watson one of the world’s most revered photographers, hailed by peers, critics, and collectors alike? Is it his unparalleled portfolio of celebrity portraits? Breathtaking landscapes? Sensual nudes, still lifes, illustrious fashion shoots?
KAOS presents a kaleidoscopic overview of Watson’s career to date and the dazzling array of subjects, objects, people, and places he has encountered along the way. A skillfully curated survey of a uniquely diverse, dynamic portfolio, it spans nearly half a century of photography to encounter stars, statesmen, women, and strangers; bound through neon-blazing cities; find figures poised, gymnastic, or shimmering with nude eroticism; roam the bright lights and the backstreets; soak up extravagant sunsets; enter the controlled studio environment; and breathe in the elemental wilds of the photographer’s native Scotland.
From Watson’s breakthrough portrait of Alfred Hitchcock for the Christmas 1973 edition of Harper’s Bazaar to a 2016 shot of Kanye West, each photograph reverberates with tightly coiled power, tension, and poetry. Whether it’s a portrait of a Las Vegas dominatrix, Elvis’s gold suit, a chimpanzee, or a street scene in China, Watson excels in capturing the surface seamlessly and probing its myriad depths. Along the way, his celebrity portraiture, including the likes of David Bowie, Jay Z, Mick Jagger, Michael Jackson, Jack Nicholson, Steve Jobs, and Andy Warhol, shows a particular interest in the private person behind the iconic façade.
This remarkable collection is accompanied by an essay from the recently retired head of photographs at Christie’s, Philippe Garner, and extensive quotes from Watson, as well as dozens of previously unpublished Polaroids, culled from Watson’s personal archives. The result is a defining document of the “photographer’s photographer,” iridescent in its graphic, often cinematic allure, and irresistible in its eclectic glory.

“Albert is the daddy of his field; profound and intellectual.” — Sade

The artist:
Albert Watson (b. 1942) born in Scotland, his striking images have appeared on more than a hundred covers of Vogue and have been featured in countless other publications, including Rolling Stone and Time. Watson has also photographed for hundreds of successful ad campaigns for companies such as Prada, Revlon, and Chanel. All the while, he has spent much of his time working on personal projects from Marrakech to Las Vegas. His breakthrough came in 1973, with a shot he still considers the most important of his career: Alfred Hitchcock holding a plucked goose.

The author:
Philippe Garner is an expert in 20th-century photography, design, and decorative art. He has written numerous essays and books, from studies of the lives of Émile Gallé and photographers Cecil Beaton and John Cowan, to his Sixties Design for TASCHEN. A former director of Christie’s, he has also curated shows for museums in London, Paris, and Tokyo.

The editor:
Reuel Golden is former editor of the British Journal of Photography. His TASCHEN titles include, Mick Rock: The Rise of David Bowie, both London and New York Portrait of a City books, Capitol Records, Andy Warhol. Polaroids, The Rolling Stones, Her Majesty, The beautiful game, and the National Geographic editions.