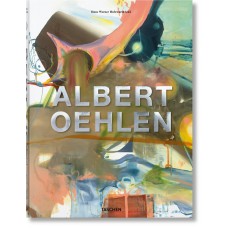 Meet the full range of Albert Oehlen’s artistic approaches from his early work to the present day. Whether paintings with mirrors, in primary colors or only in gray, heavily pixelated computer paintings or garish poster ads on canvases: more than 400 featured works attest to the audacious and innovative strategies that have secured Oehlen’s place as the “most resourceful abstract painter alive.”
The paintings of Albert Oehlen live by audacious strategies, by questioning the image and the rules of abstraction, and by an openness and beauty often reached through the unlikeliest of means.
In this expansive monograph, we meet the full range of Oehlen’s artistic thoughts and approaches: paintings that integrate mirrors, paintings that are executed strictly in primary colors or only in gray, heavily pixelated paintings produced with the help of one of the first personal computers. We find collaged fragments of garish poster ads on canvases that transforming screaming slogans into abstract elements, charcoal drawings the size of a wall, finger paintings, and paintings in which black treelike silhouettes contort themselves into a lexicon of abstract forms. Throughout, Oehlen transforms the conceptual into the compositional, at once invigorating and challenging the viewer.
Revising and updating TASCHEN’s previous Collector’s Edition, this revelatory survey explores Oehlen’s trajectory from his early days up to the present. It features more than 400 paintings as well as insightful commentaries and interviews, covering Oehlen’s different work stages and approaches. Roberto Ohrt’s essay takes us back to the special vibe of the early 1980s where Oehlen worked alongside Kippenberger, Büttner, and others, part of a scene that painted quickly and close to the pulse of time. Oehlen discusses his computer paintings with John Corbett, and follows up on his more recent work, his thoughts on art, and his day in the studio in a lengthy conversation with Alexander Klar. Together with a collection of shorter texts and statements, this brings us close to the ideas of an artist who has been dubbed “the most resourceful abstract painter alive.”

“Freedom for me means playing. It does not mean to be in a void and make crazy moves, it means to play with your own rules.”— Albert Oehlen

Albert Oehlen was born in Krefeld, Germany, in 1954. After graduating from the Hochschule für Bildende Kunst, Hamburg, in 1978, he came to prominence in the early 1980s, and has exhibited internationally. Influenced by Georg Baselitz, Sigmar Polke and Gerhard Richter, Oehlen's work focuses on the process of painting, exposing its structural elements. He lives in Switzerland and Spain.

The authors :
Roberto Ohrt, born 1954 in Santiago de Chile, lives in Hamburg in Germany, and since 1990 has written on art, curated numerous exhibitions, and co-founded the Akademie Isotrop (1996–2001). Since 2001, he edits artist’s books through the Silverbridge publishing house in collaboration with Juli Susin.

John Corbett is a curator and writer based in Chicago. He is the co-owner of Corbett vs. Dempsey Gallery, author of Extended Play (1994), Microgroove: Forays into Other Music (2015), and Vinyl Freak: Love Letters to a Dying Medium (2017), and he produces CDs for Corbett vs. Dempsey’s label.

Martin Prinzhorn is a linguist at the University of Vienna and an art critic who regularly publishes essays in art books and magazines. Among many others, he has written on Georg Baselitz, Angela Bulloch, Lecia Dole­Recio, Will Fowler, Sarah Lucas, and Martin Kippenberger.