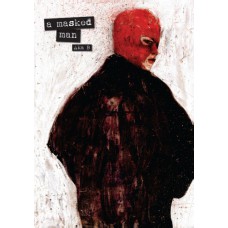 Through the achievements of a masked hero, heir to the forefather of the superheroes in costume conceived by Lee Falk in 1936 and popularized by Ray Moore’s and Wilson McCoy’s drawings, AkaB tells the story of a fragile, lonely man. He lives his life, like we all do, hiding his weak points and his true feelings behind a mask he never takes off. He promotes his image of a successful man performing spectacular deeds that he carefully sets up as a marketing expert, being well aware of the importance of a good mise-en-scène and a well-designed logo; he romantically loves a girl who is always in danger and has a preferred enemy, the Baron Spike. But behind this appearance, he hides a sensitive soul, feels lonely, worries about his future and cultivates a love that he cannot name.
Through a stripped-down, almost whispered narrative and images with a striking expressionist feel and intense grainy colours that sculpturally stand out on the page – in particular the red shades of the hero’s costume, of blood and passion – AkaB allows us to look beyond the mask of his hero, and let his complicated inner reality emerge and, in so doing, he puts us into question.

AkaB (Milano, 26/07/1976) is one of the founders of Shok Studio. He has collaborated with many of the principal US publishers, such as Marvel, Dark Horse, DC Comics. In Italy he has participated in various projects including Nixon, Lamette, LaScimmia, Monipodio, Rolling Stone, The Artist, Puck, Mucchio Selvaggio, ilMale, Lolabrigida, Collettivo Mensa, WormGod, InPensiero and El Aleph.
His experimentation has brought him closer to video and cinema, and after a whole series of shorts, and classic or flash animations, in 2003 he wrote and directed Mattatoio (Slaughterhouse), a full-length film selected for the 60th Venice International Film Festival. This was followed by Il Corpo di Cristo (The Body of Christ), selected for the Bellaria Film Festival. His invisible trilogy was subsequently completed by Vita e opere di un Santo (The life and works of a Saint), selected for the Stigma Film Festival in Palermo. He has exhibited many of his monsters generated by reason in numerous different exhibitions. Since 2010 he has been a member of the Dummy collective. His blood group is 0 Rh-maybe.
His books for #logosedizioni are: Monarch, Like a little holocaust, (also available in italian, french, spanish) A masked man, (also available in french and spanish).