THE MAKING OF STANLEY KUBRICK’S '2001: A SPACE ODYSSEY' - limited edition 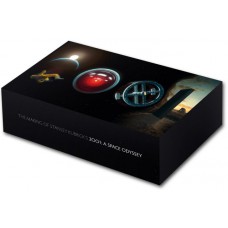 The making of magic
How Stanley Kubrick's "2001: A Space Odyssey" revolutionized science fiction and the art of cinema

It’s the movie that revolutionized science fiction and the art of cinema, that transformed the way we think about film with its special effects, narrative style, philosophical importance, and unusual musical choices. Now, fifty years after its conception, TASCHEN presents the most exhaustive publication ever devoted to 2oo1: A Space Odyssey. Limited to 1,500 copies, this landmark edition has been made in exclusive collaboration with both the Kubrick Estate and Warner Bros.

Get closer than ever to this movie that changed the movies. Conceived by the same designers behind our instant collectible Stanley Kubrick’s Napoleon: The Greatest Movie Never Made, this richly illustrated four-volume set features hundreds of previously unpublished documents and photographs, as well as personal testimony from Kubrick’s co-screenwriter Arthur C. Clarke. All hardcover volumes are presented in a sleek metal slipcase inspired by the famous monolith, and come boxed with exclusive cover art from Wayne Haag.

Limited to a total of 1,500 copies, all signed by Christiane Kubrick:

The author:
Piers Bizony has written about science and the history of technology for a wide variety of publishers in the UK and the US. A recent project, Atom, a book linked with a major BBC TV series, told the dramatic story of the rivalries and passions behind the discovery of quantum physics. The Man Who Ran the Moon picked up rave reviews for its account of NASA's lunar-era chief administrator, Jim Webb, and Starman, a gripping biography of Yuri Gagarin (co-authored with Jamie Doran) was optioned earlier this year. A feature film is being planned. His text for The Making of Stanley Kubrick’s '2001: A Space Odyssey' is a much extended and updated version of his bestselling 1994 monograph 2001: Filming the Future.

The designer:
Established in Paris in 1992, M/M (Paris) is an art and design partnership consisting of Mathias Augustyniak and Michael Amzalag. They are best known for their art direction and collaborations with musicians, fashion designers, and contemporary artists, including Björk, Madonna, Yohji Yamamoto, Balenciaga, Pierre Huyghe, and Inez van Lamsweerde & Vinoodh Matadin, as well as magazines including Vogue Paris, Interview, and Purple Fashion. In addition to solo shows in galleries in Europe and Japan, they have participated in exhibitions at Centre Pompidou and Guggenheim New York, and their work is featured in public collections around the world.