A JOURNEY IN THE PHANTASMAGORICAL GARDEN OF APPARITIO ALBINUS 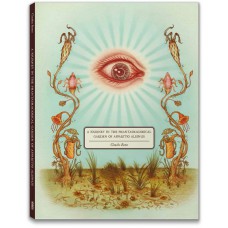 The garden of #ApparitioAlbinus is an astonishing place whose location is unknown, made of wild plains and haunted woods and populated by marvellous creatures that swarm in the greenery, swim in the oceans and cut through the skies. The master himself will introduce them to you with the scholar’s rigour and a pinch of irony, leading you through a phantasmagoria of shapes, sounds and colours that will truly amaze and deeply unsettle you. Beside friendly, intelligent automata and curious creatures half-human and half-plant, you will meet infernal machines, killer fishes, and mysterious beings that are beyond human understanding – all classified with a scrupulous and scientific approach in this volume that lies somewhere between a medieval bestiary and the catalogue of curiosities of an eccentric Sixteenth-century collector.

Claudio Romo explores the secret meanderings of nature and of the human mind, taking us into a carnivalesque and at times sinister world that shows us how life feeds on anomalies and eccentricities, not on normality. Drawing on mythological, alchemical, and science-fiction imagery, Romo reminds us of the ephemeral nature of reality, which is nothing but the product of fantasy.

Claudio Andrés Salvador Francisco Romo Torres (Claudio Romo) is an illustrator and writer born in the port city of Talcahuano, Chile, in 1968. He studied Plastic Arts at the Universidad de Concepción and got a Master degree in Visual Arts with a specialization in Graphic Design at the Academia de San Carlos, Escuela Nacional de Artes Plásticas, UNAM México. He currently teaches graphic design and drawing at the Universidad de Concepción, Chile.
His books for: A Journey in the Phantasmagorical Garden of Apparitio Albinus (also available in Italian), Nueva Carne, The Book of Imprudent Flora (also available in Italian and Spanish) Tavola smeraldina (also available in Italian and Spanish) and Bestiario Mexicano.