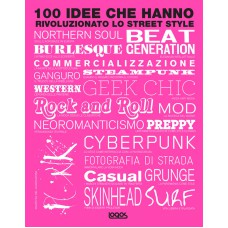 On the road again

This book is a look-by-look dissection of the key ideas that changed the way we dress – from the middle of the 20th century to the present day – explaining the most iconic items of clothing and how they were worn, what the look was born of, its cultural background, how it was received and how it still resonates in fashion today.

The modern wardrobe owes its development not just to fashion designers in Paris or Milan but also to gangs and movements brought together by a shared appreciation of music, sport or a particular underground culture, and a certain style that defines membership.

These styles have rocked establishments, created stereotypes, expressed social division as much as they have united people, entered the language, spread around the world and, above all, transformed dress for a wider public.

The author:
Josh Sims is a freelance style writer, contributing to the likes of The Financial Times, The Independent, The Independent on Sunday, Mail on Sunday, Channel 4, the BBC, Esquire, GQ, Wallpaper* and i-D. He is also author of Rock/Fashion (Omnibus), A Dictionary of Fashion Designers (Collins), Mary, Queen of Shops (BBC Books) and contributor to several fashion books from Taschen. He has extensive contacts within the style and mainstream press.

From the introduction to the book:
“While the trickledown effect – in which street style derives from the diktats of the catwalks – used to be dominant, there has since been an acceptance that, increasingly, the real style – more local, less publicized, not underpinned by huge financial interests – is found at street level. Style trickles up to the catwalk and is reimagined there as a high-gloss version that is tagged “fashion” and made both rarified (for the designer market) and approachable (for the high street). Sometimes it is those designers who are lauded as most outlandishly imaginative – the likes of Vivienne Westwood, John Galliano or Alexander McQueen, to name just three Britons – who are most sensitive to what is happening in the real world around them. It cannot just be coincidence that their design flair is backed by a sensibility for being ‘down with the kids’, as they used to say. (…)

It is hard to imagine a new street style embraced with the passion and conviction – such that it becomes a way of life as much as a way of dress – that fuelled such profoundly influential subcultures as, for example, the zazous, Teddy boys, mods or goths. Given how society has fetishized youth and embraced the outsider as an aspirational character over more recent decades, it is easy now to forget just how groundbreaking these street styles were: to stand apart from the crowd through one’s dress was to invite more than ridicule or raised eyebrows. It could invite violence. But in sticking to their street style through thick and thin, its adherents shaped their identity, found a comradeship in shared sartorial leanings and, most importantly, challenged the societal status quo. Street style subcultures are, indeed, much more than the clothes that make them.”