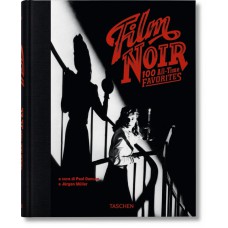 Into the shadows
From The Cabinet of Dr. Caligari to Drive, 100 all-time favorite film noirs and neo-noirs

Enter a world populated by private eyes, gangsters, psychopaths, and femmes fatales, where deception, lust, and betrayal run rampant. The first film-by-film photography book on film noir and neo-noir, this essential collection begins with the early genre influencers of German and French silent film, journeys through such seminal works such as Double Indemnity, The Postman Always Rings Twice, and Vertigo, and arrives at the present day via Chinatown, Pulp Fiction, Heat, and the recent cult favorite Drive.

Entries include posters, tons of rare stills, cast/crew details, quotes from the films and from critics, and analyses of the films. Film director, film noir scholar, and Taxi Driver screenwriter Paul Schrader provides the introduction to this feast of noir worship. Populated by the genre’s most revered directors, like Hitchcock, Wilder, Welles, Polanski, Mann, and Scorsese, the book also pays homage to its iconic faces, including Mitchum, Bogart, Hayworth, Bergman, Grant, Bacall, Crawford, Nicholson, Pacino, and so many more.

The editors:
Paul Duncan is a film historian who has edited 50 film books for TASCHEN, including The James Bond Archives, The Charlie Chaplin Archives and The Godfather Family Album.

Jürgen Müller has worked as an art critic, a curator of numerous exhibitions, a visiting professor at various universities, and has published books and numerous articles on cinema and art history. Currently he holds the chair for art history at the University of Dresden, where he lives. Müller is the series editor for TASCHEN’s Movies decade titles.